Some people are born with a yearning for Africa in their veins.

Unbeknownst to them, they live their quiet, accommodated lives until the primeval continent’s siren call is awakened by chance. It could be The Lion King, a documentary, an article on NGOs working in the slums of some African city.

Suddenly, the dormant yearning twitches, yawns, blinks awake. The black mystery beckons, and you know you’ll eventually succumb to the calling. Probably often, if circumstances allow you to.

Well, I wasn’t born with such a yearning.

Yet, in spite of it, here I am. Again. Nearly straddling the equator line, and drinking the sights and sounds of a country that feels alien, yet achingly familiar at the same time.

I haven’t seen much of the country, granted. My perspective is reduced to Kampala, and the impressions gathered for a few weeks there, living European-style, but not tourist-style.

However, my experience has been enriched and deepened by the people I’ve met here. They have shared some of their experiences, life-views, their thoughts. They’ve matched my curiosity with questions of their own. I’ve prayed for them to do good on their exams, asked them for book recommendations, shared food and a table with some of them. I’ve been given precious gifts which I cherish.

I’ve been surprised and disturbed by differences between my background culture and theirs, whether openly acknowledged, or just hinted at. There’s no mistaking that Uganda is different from the places I’ve seen and lived in Europe. Some values are relative, context-bound.

Yet I’ve also felt a deep sense of kinship, of shared humanity. Of laughter. Because yes, we can make each other laugh. Flirting feels the same way, too.

There might be places—cultural, ethical, social— where we don’t understand one another, and we’re quick to draw dividing lines between how Africans think and behave, and how Westerners think and behave.

It’s funny to realize, though, that Ugandans draw lines just as well. Between town-folk and village-folk. Between tribes and clans. Between mzungu, and ebony-skinned people.

However, from my experience, an essential unity remains. Fractured by culture(s) into fractals, sure. Reinterpretations of a single theme, covered by countless musicians swapping instruments, tweaking rhythms, adding trills, launching into improvisations that gradually return to the main melody.

It all burns down to the tune called “being human”.

Uganda, for me, smells like burnt rubber; cooked meat on the streets; red dust.

It smells green, like the pumpkin and squash vines that crawl along the banks of the roads in Kampala.

It’s a noisy smell. It’s a smell full of people, and chicken, and goats ambling by the streets. Occasionally, a smattering of ducks. Rarely, a cow.

It smells like piles of rubbish turning to ashes on the dusty soil.

It sounds like potholes, like asphalt once smooth that’s been randomly emptied with a giant spoon, leaving patches of valleys and hillocks in its wake. Asphalt that forgot to be asphalt, merging into the red soil, disappearing, reappearing, unpredictable. 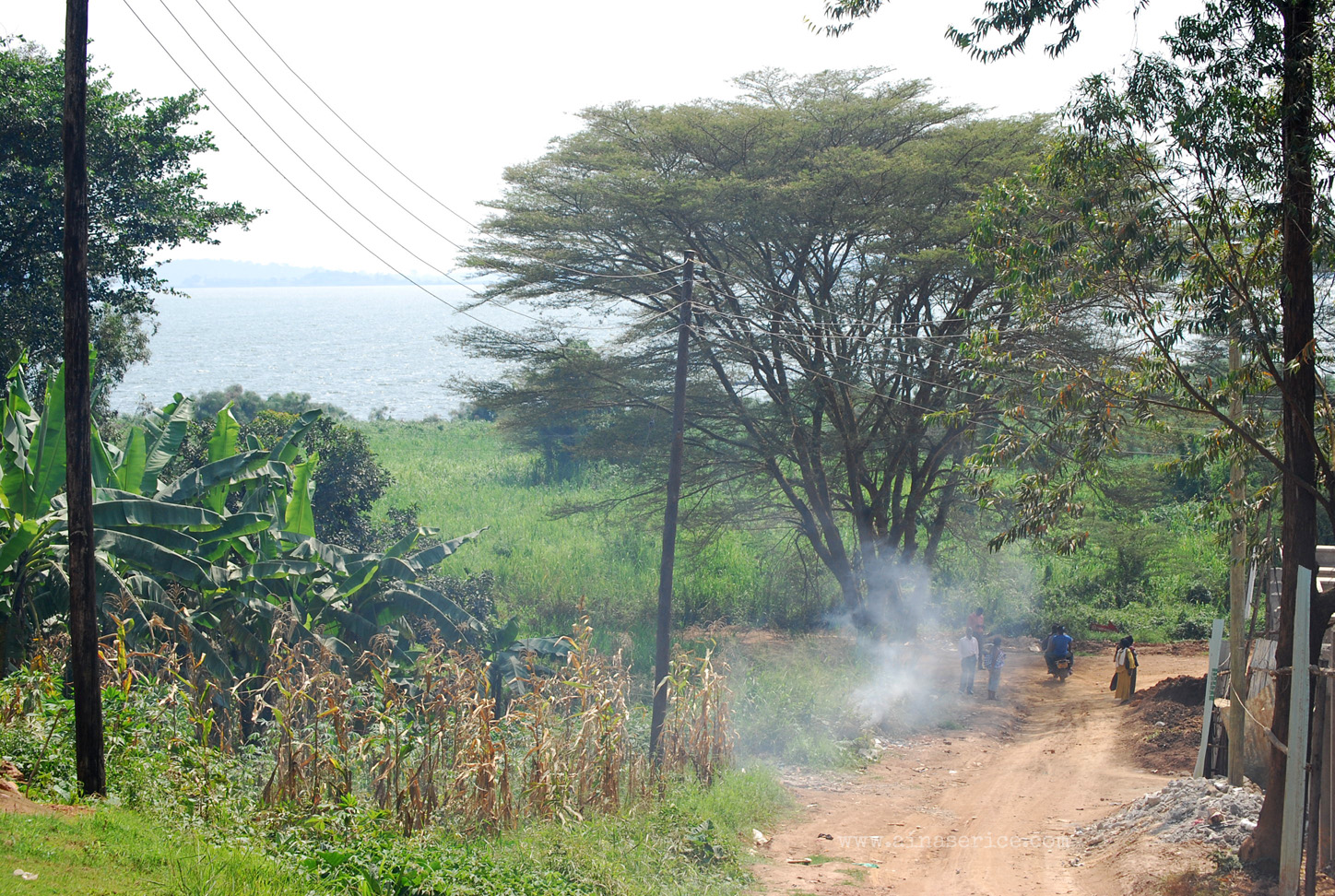 It sounds like a hundred birdcalls in the morning. Our European warblers are choirboys compared to the primadonnas here. They don’t exactly sing; it’s too piercing to be called song. It’s more of a… vocal statement.

It sounds like creaky cars, with their arthritic non-existent joints groaning when they change gears or step on the brake. Only place I’ve seen gas tank being refilled with the car engine still purring. It didn’t explode, I’m (very) happy to say.

It sounds like pineapple-tapping on the back of an old pickup, with an orderly line of fruits ready to be inspected and properly spanked, its auditory qualities carefully evaluated before choosing the better-sounding one. In lieu of xylophones, we get ananas-phone concerts in Kitintale market.

It looks like a chiaroscuro in the flesh. Opulence a stone’s throw away from huts made out of scrap. Old metal sheets patched together, no floor to speak of—just soil. Red, uneven soil.

People, people everywhere. Walking, always walking. It doesn’t matter if it’s midday or 2 am in the morning, you’re bound to see people walking along the road. As if their purpose, their destination was the road itself, eerily bound to the act of walking itself.

Of course they must be going somewhere; their homes, their families, their work. You don’t decide to take a stroll for fun at 4 am in the morning. Yet the silent distance that lies between us, made of speed and a car glass windowpane, perpetuates the impression of wandering souls always on the move.

It looks like lush trees, half-choked by vines that, while tame and restrained in Europe, grow to astonishing sizes here.

(It looks like an armed policeman actually asking about my taking pictures of the vines, snapped at an inconveniently short distance of some Presidential building, or somesuch thing. For the record, I got to keep the picture).

And, if it’s not vines, then it’s birds. Improbably huge birds perched atop branches that appear much too frail to support such weight without breaking. Yet they must be sturdy things, because the birds seem pretty at ease—at least, from afar they do. They might be risk-addicted junkies loving the thrill of resting on creaky branches, but they don’t really strike me as the type, to be honest. 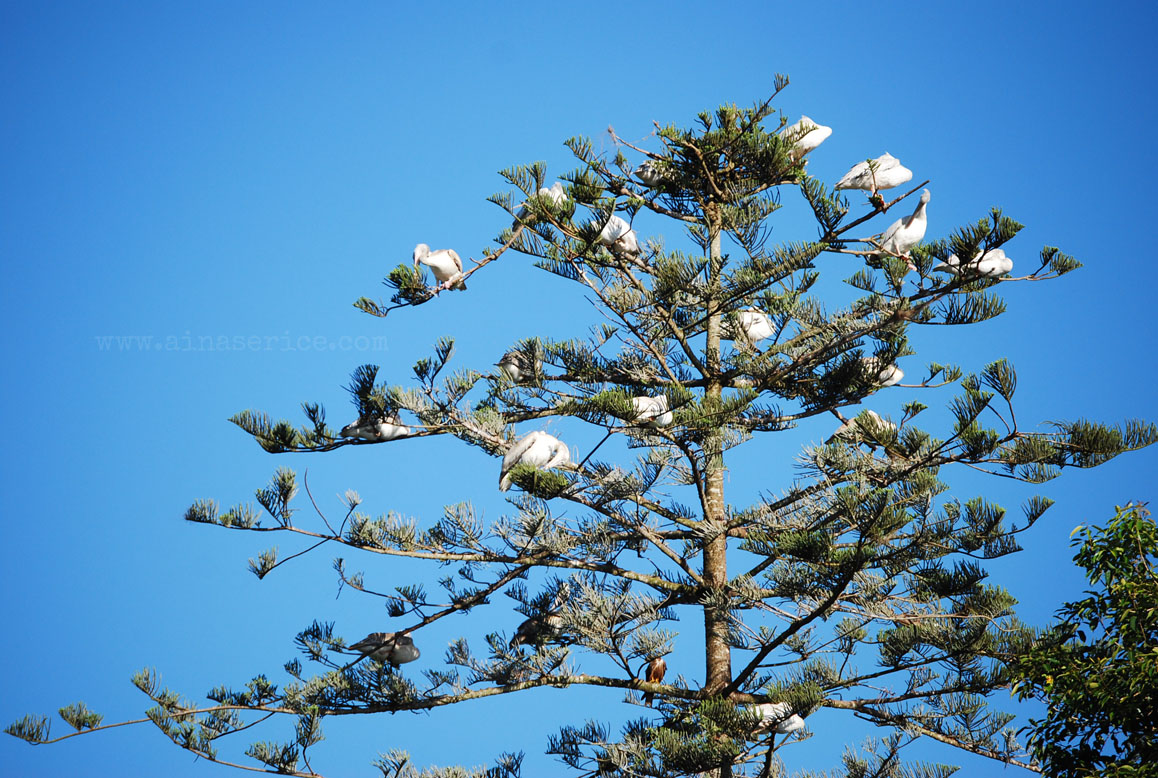 Uganda looks like a rainbow of saturated colors and bright edges. Banana leaves sharply silhouetted against sky-blue. Sunset claws leaving red streaks above lake Victoria. Yet at the same time, it’s a picture bleached by heat and dust, overwhelmed by green and tawny hues splotched by the colorful chaos of the slum huts.

I know what Uganda feels like to my nose, my ears, my eyes.

Like pineapple, yes, so fragrantly sweet its scent can flood a room with mouthwatering speed once slashed open. Like mangoes, which don’t grow during the wet season, and paw-paw, which isn’t really my kind of fruit. Like Charles cutting open a jackfruit just because I mentioned I’d love to taste it. Gotta rub it real well, lest one ends up eating more sticky latex than pulp, sweet pulp of indescribable flavor.

Ineffable, by definition. Our gustatory imagination is incapable of accurately recreating a flavor we’ve never tasted before.

And I haven’t been able to try much of Ugandan food, because I haven’t been living with Ugandans here—but with Italians. And, let me tell you, Italians usually are in an obsessive love relationship with their own food; everything pales in comparison to spaghetti al pesto or any other pasta dish, not to mention cheese or cured sausages. Concerning food, Italians don’t go native—they bring Italy with them, and doggedly refuse to let go.

(Mind, I’m not exactly complaining, only stating a fact; R, you know I love pesto, and that I’m just teasing… It’s all kinda true, though, ahem).

I have been able to try a few things, here and there. Yet, not having tasted all the food myself, I recruited my Ugandan friends for help, so they could tell me about Uganda’s culinary traditions and heritage.

I have given voice to what they’ve told me, but they’re the ones that have made these articles possible. So, to you all, thank you.

☙ Back to Ugandan Portraits